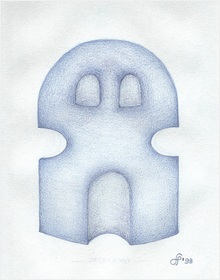 Suddenly it was completely clear that the separate self is always busy to improve itself, to give itself more value. With the added value 'I' will be able to receive and have more, and thus become happier.

This fight for improvement totally exhausted the illusory 'I'… and on the bottom of this apparent impotence there was a seeing: this grim struggle represented the subtly hidden jealous super-ego, the 'me' that doesn't allow 'the other' anything, because it thinks it is worthless. This shadow feeds off believe and is totally afraid of scarcity.

Unexpectedly it was revealed that true Nature appears as everything… Allowing myself to be open benefits the Whole… 'I' is the actual sense of True Nature, always Now. Gradually 'wanting to have' changed into 'giving'. Then came the insight that the Whole is always worthy of Itself, everything, or its ever surprising natural beauty… because It is That…

This Giving is totally different than the giving that ego-activity imagines. It is not 'a' someone that gives, but an outpouring of Love… which cannot but look for Itself in 'the other'. This Flow - in her innocence - dissolves all separateness and confusion.

This Giving is more a surprised receiving of what is being given uninterruptedly. This Being is so calm and loving, so completely unimaginable, that the mind becomes very quiet. Suddenly it is clear what is meant by the word 'pouring'… it is the spontaneous outpouring, the giving of the inexhaustible Life which gives Itself to Itself… as the relative world of apparent forms.