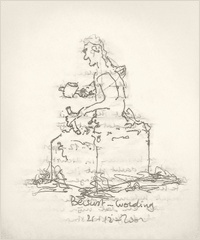 The process of 'becoming aware' often brings in a period in which discontent and disappointment keep coming up. Often this happens in dreams, and you wake up with it angry. Always there is a feeling of 'a me' that has suffered injustice, 'a me' that is not seen, cannot show its power, is suppressed, gets no appreciation, doesn't reach its destiny, or is not where it should be.

Attention is lured into it very quickly, because the anger feels so obvious. This is because of the underlying conviction of the separate me, to whom everything happens.

From this basis of 'failure' a mission arises, with the purpose to prove that 'I' cán do it. This attitude of this time I will succeed can dominate the mind for ages. All kinds of techniques and methods play in to that and are aimed at becoming 'your best self', and reaching 'your ultimate strength and success'.

The mission feeds off a longing to be seen, and approved in strength, value and significance. This longing comes from the collected 'disappointments and failures'. These were put away in denial at the moment they happened, to prevent loss of face.

The longing is a direct consequence of identification with the failure, disappointment and discontent. The attention in the identification is ruled by resistance to the under-layer of unworthiness. In stead of being open and embracing what present itself, it aims at becoming better and successful, or at retaliation.

Realisation of the true Nature invalidates the longing and the mission, because it is deeply felt that the 'me' that was wronged doesn't exist and consciousness is indivisible, comes from nowhere and goes nowhere.

The habit of the mind, to look at everything from a separate self, is stubborn and actually a state of hypnoses. By silently staying open from your true Nature of Light, the indignation and disappointment lose their weight. With that also the idea of the subtle ego evaporates. The mental activity of indignation and resistance eventually surrenders and attention falls back in the directness of Being.

Staying open to or with whatever presents itself inside isn't always easy. For centuries mind has been programmed to believe that fulfilment will come when the destiny is reached, after it has been proven that 'I' can do it, or after revenge has been taken. In stead of being open inwardly to disappointment and despair, attention rather holds on to hope and assumption.

This holding on often is an unconscious turning away from van suppressed shock from the past. It is difficult permeate the denial and usually a new shock is necessary to break open the hypnoses.

This may happen through life itself, as an accident, a disease, or when through exhaustion the mind cannot go on any more… then control breaks open.

Sometimes there is the willingness to stop… the longing for Truth is bigger than the need for satisfaction. The frustration and discontent has been enough then, the mental activity of resistance surrenders, and Consciousness recognises itself as the Peace that surpasses all understanding.