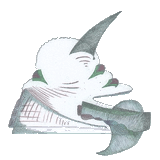 Ego-mind is used to imagine everything as separate objects, which supposedly exist apart from 'I'. Things outside cause impressions, oppositions and problems inside.

This mental activity of objectifying (dividing and classifying) could be called 'story telling'. The stories have a high level of drama, with a protagonist - me - in trouble. Arguing and constructing takes place from this imaginary me-figure.

The tone in the mind often is indignant, or fraught with discontent and blame. There is an ongoing commentary and in fact the mind is in a state of hypnoses.

The storyteller is an expert in concealing, censuring, denying and pretending. It is capable of ignoring certain aspects completely or hold out the opposite of something, especially to itself. It has to, in order to keep underlying doubt and fear out of sight. There is always suspicion, because the appearance can be brought down, the bubble might burst.

This activity stems from tension. The base of that is believe in, and holding onto impressions, experiences, conditioning, programming and interpretation. Together that seems to represent the identity, as if 'I' is that.

The Nature of Mind is unprejudiced, pure Consciousness… Light. The alleging ego-mind is Consciousness mixed with ideas and concepts which evoke the suggestion of a separately existing 'I'. Perceiving is what happens spontaneously from Light. The ego however claims to be the owner and doer of the perceiving.

Belief in this mis-identification creates an apparent separate mind, which uninterruptedly deludes itself. From there it tries to manipulate 'the world'. Mind is filled with an artificial reality, an imagined world with in it a psychological figure which is totally determined by its standpoints, the narrative.

Ego-mind is obsessed with whát is perceived, and forgets thát there's perceiving. Whát is perceived is the projection of what the false self presumes. What perceives is Consciousness, or the true Nature of Light.

Noticing what perceives brings realization of what always invariably is the Stillness of true nature. Stillness is what remains in deep sleep, what remains when all the objective falls away. Stillness is always the indivisible Consciousness which appears as everything.

In still Awareness you can observe the stories of the storyteller. Realization of Awareness stops the objectifying, identifying and projecting, and breaks attention being compelled by allegations.

The storyteller gives assumed meanings to everything, which are exclusively determined by its convictions. That is like the onlooker of a movie. The movie is a string of dead images which get meaning through the belief that the onlooker gives to them.

The onlooker actually is the witness, which grows into a projecting storyteller when it forgets its true Nature of Light. It is compelled by assumptions coming from the false identity.

Awakening is the breaking of that delusion… recognizing the witness as Awareness, and realizing that 'I' is the direct Being. Consciousness is not a someone who is conscious, but the self-Luminous that Is.

Allegations are thoughts, thought turns out to be Consciousness. Allegations lose their weight, when they are not linked to the false 'I'… when it is realized that you can perceive the me-construction and that you are the Perceiving. In still Awareness the investing in the false I stops, and, together with the story, it evaporates.

In Stillness the struggle of the storyteller becomes visible. In the basis of that reigns anger… indignation about existence, with under it the lostness of the false self. Stillness pierces through the blame and defense, and dismantles the false self.

This 'under-layer of existential confusion' is collective. It is passed on through the ovum and sperm. It is also the 'layer' in which desperation evolves about the apparent incapacity and inferiority that come with the lostness.

In Stillness everything is brought back to God. That happens by itself, when - in stead of being focused on thoughts - attention rests in Awareness… Awareness is God.

Recognizing the witness as Awareness stops the dividing in subject en object. Perceiving then is no more a somebody that perceives, but the indivisible One.