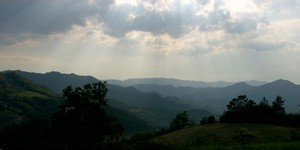 The Calling is timeless, without beginning or end and singular. Consciousness is evoked in and as the form with every conception. In that Calling is the totality of the Universe, the becoming of planets, the forming of lands and seas, and the evolving of all life forms.

At birth the singular Calling is there, in the starting of the breathing. The Calling is lured outward and gets used to manipulating the voice that stems from the Calling. Turned outward the voice forgets its Calling and seems lost in the mind.

Loneliness and exhaustion eventually, force the voice into silence and conscious Dying announces itself. The building in which the voice pretended safety breaks down… Naked, being remembers and realizes her Calling. The voice changes in tone, the yelling and screaming at the world stops.