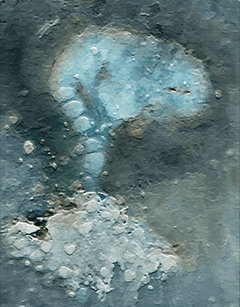 Awakening may bring periods of desperation, grieve, exhaustion, anger and incapacity. Often this isn't recognized as part of the process of spiritual Awakening.

Mind breaks open from a state of cramp and hypnoses and relaxes back into an all-embracing spaciousness, where all ideas of proportion and distance evaporate. In this Openness stuff, which was suppressed or denied longtime, may surface.

Until the Awakening it is not clear that there is identification with an imposed identity with no sense of true Nature. Obedience reigns, to spiritual ideology, social conditioning, convictions, tendencies…

Mind tries to satisfy demands and conditions to get a sense of value and belonging. The weariness and frustration of that announce themselves when the mind breaks open.

Often there is exhaustion: mind cannot maintain the struggle for fulfillment and breaks. Investment in missions and goals stops, which may bring feelings of having failed, as well as disappointment, depression or absurdity. Breaking open can be triggered through divorce, illness, crisis, getting fired, an accident or unexpected turn in life…

Being which is always Home

If Awakening is not recognized, mind gets stuck in disappointment and discontent… seen from the ego it seems as if everything failed and life makes no sense any more. That falls away… when recognition of true Nature - the awake Being - really pierces through. It is then absolutely clear that the Yearning always was for this, the awake Being Home.

Until the breaking open ego-mind can stay angry and in resistance for very long. It holds on to vague stories, to justify discontent, indignation and resentment.

This tone usually is unconscious, and often hides in perfection, 'doing good', gathering prestige, wanting to prove. Awakening brings about a shift: the striving is noticed and turns out to taste very bitter, without truly bringing satisfaction.

The layer from where resentment was fed is sensed. This collection of misunderstood experiences confirms the victim-identity. Feeling this layer may cause more confusion and resistance: the experiences are old, yet for the mind they seem to happen now.

Little things can evoke great indignation: old frustrations vibrate with what goes different now, making that look horrible. Life, or the other, becomes the evildoer to whom all hoarded frustration and anger can be ventilated.

What especially is noticed is that the mind is not at all comfortable and avoids contact. Attention often is away from the body and survival takes place in an ungrounded cocoon.

Awakening comes with the recognition of something indescribable, that presents Itself as a timeless Present Being, an aware Presence that - prior to everything - is peaceful.

It is from this Recognizing that all the difficult themes, habits and patterns are embraced in Stilness. Precisely this staying attentively quiet - truly open and allowing - makes Love happen. Also the vagaries of the obstinate mind fade in this recognized still Being.

In this fase of confusion, fear and resistance, it's helpful if there's someone who lives from this direct Being. Attention drops back, from the desperation into the safety of Being… there is grounding again.

Often very soon the next wave of fear and panic arises… mind is not used to be open to feelings of discomfort, fear, anger or incapacity. The suggestion that this is totally wrong can be very convincing.

Exactly then it is important to stay open and allow everything. You can recognize there is something prior to all appearances. There is the Light of Consciousness, the Light that you are… all-embracing, indivisable, ageless, and before everything unconditional.

Identity is the Peace that Is

This Light is the Peace which the mind yearns for. It is seen that identity isn't in the activity of the mind, which wants to control everything, but in this Peace that Is.

Through recognizing this Peace, patterns of resistance and protest lose their grip on the mind and subside in Awareness. So does the tense need for control, the desperate lostness because of failing to get control, and the gnawing under-appreciation.

This understanding - this Recognizing - is a 'non-happening', because Awareness, or Light, always is the case, ánd an enormous psychological shift, because attention drops back, from the thinkable imagination into the all-embracing Being Home. Mind doesn't have to take care of status and value after Recognition of the Peace that Is.

At first mind can't handle the falling away of the false identity. With all its might it tries to get attention back in the me-illusion. Great resistance and indignation fill the mind… there is shame for not being able to relax, then anger and despair because of recurring under-appreciation.

Mind struggles and fights, to be somebody… until the Recognition, until it really pierces through that 'I' is not the imaginable, but self-Luminous, Thát which enables imagination. Then it is clear that 'being not a someone' is the true Nature… peaceful and joyful.