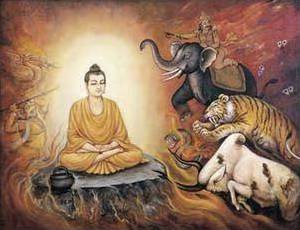 Often the mind is fixed on yesterday or tomorow, from resistance to what doesn't feel good now. It isn't clear that the mind is resisting its own projections… the Awareness in itself isn't noticed.

Awareness is the Rest or Peace for which the restless activity of the mind is longing. However, it searches this rest in relationships, in objects, in something which is 'outside' and has to bring fulfilment 'inside'. Attention may be stuck in this outwardly directed struggle for very long, without noticing the peace of Being.

The same can happen in the 'waking' state. Attention is fixated in an attitude, trying very hard to free itself from the feeling of being stuck, while all the time not succeeding in it. Yet it is possible to wake up from this 'hypnosis'.

What might help to break this 'hypnosis' is Noticing. During the looking away from, or being fixed on something, you can notice that there is Witnessing… Witnessing is That to which everything appears. Attention can turn around to this Witnessing. The Witnessing is your true nature of Peace.

The Peace is the Directness of Being… what you always are. Sometimes, for example during a beautiful sunrise, attention spontaneously falls back in the peace of this Directness. Mind stops, time is gone, and there is no border between perceiving and percveived.

The noticing of Witnessing can be called 'Practising Peace'. (see: 'Be Present') There dwells an amazing tenderness in Noticing, in patiently being aware of what's going on inside… in being aware of That to which everything appears.

That to which everything appears is the self-luminous, the objectless Truth of your Being. Staying open from there - Noticing - makes it possible for the Light to pierce through in what is perceived. The mental attitude loses its prejudice, her fixations and defensive tone.

Being aware of Awareness - Noticing - makes you realize that Awareness isn't an activity… Noticing is very beneficial to the mind and its convictions. The idea of the separate person which has to come to fulfilment drops away, the attitude in de world becomes open.

There is a clear distinction between the voice of the ego-mind and the Stillness of Being. The ego surrenders more and more to this Directness of Being when the sense of still, timeless Awareness - the true Self - is a living reality. Ego follows the mind in the realizing, in the recognition of Truthfulness… in the Noticing.

Practising Peace can be done everywhere… in the meeting with intimate ones and people where painful habits are being activated. Also when unexplainable attitudes and patterns come up. These are vasanas and samskaras, or karmic tendencies and impressions, which also - in patiently noticing - can come to rest.

Acquired habits, addictions and fear-mechanics are recognized in Noticing as ways of avoiding an under-layer of denied pain. There also the tenderness of Being eventually pierces through.

What gets completely clear is how the mind, forgetting its source of direct Truth, produces an ego which believes its own projections. It is caught by the inclination for power, 'special' forces and control, as a compensation for the lack of a sense of Wholeness.

Appreciation of inner Witnessing in meeting the other, enables, in being patiently open, the compelling experience that you are facing yourSelf… that there is just the one Self - God. 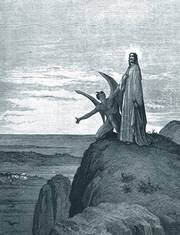 The surrender to, and recognition of this Openness, brings a deep moving sense that This is what you longed for. The recognition will be tested in many ways…

Stillness is overwhelming, un-imaginable, and totally different from what you ever thought or expected. Ego wants to pride itself in reaching something, to be able to derive confidence and mental superiority from that. It doesn't want to allow the convictions of unworthiness that were put away in denial.

Maybe you recognize having worked hard on getting better, conquer a place in the world, becoming successful, with the sole purpose of being at ease and at home with yourself, in order to relax… 'if at last I'm not insecure any more… if I won't make this mistake again… if finally I know where to go with my life'.

Maybe you discover that the relaxation, which you were searching for so long, is right here… as the Openness of your true nature, the Witnessing in Itself. That is the open Being, in which nothing needs to be fearfully concealed, the Openness in which apartheid stops and also the restlessness and desperation of the lagging mind are welcome.