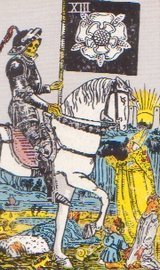 Ego-activity cannot see that forms are illusions, because it builds its argument on the rigidity of forms. It cannot admit that forms don't exist, because with that it finishes itself. The phenomenon Emptiness, or the Mystery of indescribability therefore seems unacceptable.

Forms are appearances of energy… always changing. What seems fixed and solid is the image made of the appearance. This happens as psychological imagining: from alleged solidity formulas and explanations grow. An imaginary order suggests certainty.

From this 'order' the mind draws trust. Mind is an activity. It seems an existing form, but is the Intelligence evoked by Being, aware of circumstances, representing an ever changing world.

Intelligence seems to be 'some-thing' you can have or miss. Being is imagined as a form, which gets the name 'I'. To this form characteristics are ascribed that are either good or bad. In some Zen-circles there is a saying: if you see the buddha… kill it.

If the appearance is seen as a truly existing form, separation seems to be there. 'I' seems to worship or reject a form outside of 'I'. This is the division of Being in 'me' and 'other'. Mental activity feels like an I-form that concocts other forms to fabricate a world-image with gods and devils (good and bad).

Ego often is an activity coming from fear of not existing. The 'I' that seems to be active cannot accept All-One-ness, because with that the existence of the I-form would stop. There is only All-One-ness. This is also called God, or Love, light, Tao, Awareness… God is not a form, but the appearance of apparent forms, and the experiencing of that.

Ego is afraid of Oneness. In the realm of the person, Oneness is interpreted as alone and lonely. This comes from the individuation of Being. A habit grew of trying to bring the apparent I-form to its true proportion - becoming. This imagined movement is animated with belief.

Ego is not the enemy, but an activity that can be reminded of the Source of inexhaustible Love and ineradicable being… the Being that Is… the Being that is before time.   Being Is