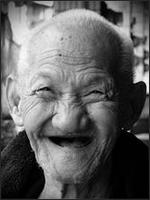 People often are engaged 'outside' themselves, in a hypnotic search for means to give them a sense of being young… means to keep death at a distance. This comes from fear of not being of value.

Directness of Being has no age and is always the innocent Life. This immediacy is spontaneous and only seems limited through imagination. Usually imagination is governed by identification with the body, thus by time and fear of death.

Attention can rest in Directness, in stead of following the allegations of the lagging mind. Mind is an activity, which surrenders through, and in realization of Immediacy. This realization is the living Now… made into a concept it becomes relative 'knowledge' that serves the illusion of describability.

Eternal youth doesn't mean trying to keep the body from getting older… Ego, or identification with form, also applies botox and plastic surgery on the spiritual self-image. This psychological identity does not exist, I is not an image… I always refers to direct Awareness. Eternal youth is here now, as knowingness, or Life-Love-Light.

Clinging to an assumed past (identity) melts in the tenderness of Being. Clinging is attention, which animates the psychological image. This activity veils true Nature, or spontaneous Life. The imagined 'me' dissolves in recognition of direct Being.

For directness of Being impermanence or old age does not exist. Obsession with time is the ego running away from confusion about Being… the mind cannot understand the timelessness of Being because it needs ideas about Being, to be able to compare and judge.

Eternal youth is also called 'inner child'. The word child often evokes a psychological story-line, which is colored by misconceived youth-experiences. Inner Child, however, is this Presence, which, as direct Life, gives a sense of Being.

This sense of Being habitually is imagined as a person, which experiences and has a history. To recognize Directness is waking up from the story-line… and seeing through identification with the main actor as an imaginary me-battle.