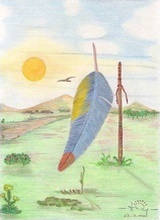 Ensoulment is what happens spontaneously before time in the Now. Goals have to do with time, with accomplishing something, and are often made up with underlying intentions. Ego-activity hopes - in reaching the goal - to become happier, better, more important or powerful. Ego is an activity apparently stuck in an idea about Being.

It can also be said that during a certain time there was a fascination for this or that, but that is always after it happened. Ensoulment knows no time and always serves the totality. It happens spontaneously, and the sense of being cannot but surrender to it.

Cleaning and maintaining goals is an activity which can be used by the ego to avoid 'having' certain experiences. Usually this activity has as a basis the idea that reaching the goal will increase the value of the self and that fulfillment will be there.

Underneath this basic thought is fear for direct experience of what is here now. 'Intention' seems an attitude to which the sense of being can hold on to. Deep Looking reveals that this intention actually is a subtle form of control, to keep at a distance what Life touches and offers. The sense of being turns around instead of meeting the fear.

To veil this flight-construction the concept 'havingness' can be used. This is an idea with which a seemingly separate person can 'work' on getting what it wants. The sense of being is imagined as a separately existing object. It needs something to compensate for the lack of inner Wholeness and not experiencing the directness of Life.

This object is in distrust to the Source, because the Source takes all forms. Ensoulment is what always comes directly from the Source. Being distrusts itself because it is lured in an idea about itself. The living Being seems threatening, because it is ungraspable and cannot be described.

Ego is mental activity appearing to be captured in an idea about Being. Being is not an object but a living Presence manifesting in endless appearances. However, It always stays the one Being.

Intention can therefore, in this context, also be seen as ego in competition with God, which is in essence fear for Life, love and Light. Goals usually belong to someone, where God is the self-active Being… or action without a doer. surrender to That seems very scary, because of fear for death of the ego, or fear suggested by control activity.

Belief in fear and allegation forces the sense of being to keep on identifying with the I-shape. The moment in which the illusion of that breaks open cannot be forced. In that way ego-will can also be seen as God's will. Everything is part of an intelligent field, in which everything is connected to everything and delivers a context for becoming aware. All happens on exactly the right moment.

The ego-fiction is always the lagging behind of what already has happened. It claims ownership of the Mystery that cannot be divided into describable parts. This shadow activity is what takes place in an imagined time, on top of what happens timelessly and without intention as Life Now.

In the realm of ego-activity often great indignation festers, keeping the sense of being in its grip. An attitude of judging and disapproving from a distance seems justified. Always there is the I-form that claims I cannot be there, because of wrong doings of the outside world.

Underneath indignation lay misunderstood and un-explored convictions. Uncertainty comes from experiences that evoke guilt and shame. Being angry at the world is very often reversed self-hate turned outwards. There is a subconscious conviction that in certain circumstances the I-form should have acted differently (better).

On the psychological level a contraction feeds this attitude. It draws from collective, family and cultural convictions. looked at from misconceptions, the world always seems against 'me'. The synchronicity and possibilities of the cosmos stay unheeded, because the sense of being is locked up in a contracted way of looking. Presumptuousness keeps Life at a distance.

Giving up convictions feels not safe, because with that the back-up of the collective, the family or the culture falls away. Identity seems to stop, just like the habit to keep the world at a distance with anger. Surrender to Being results in feeling naked and unprotected.

The ability to experience is the direct, ageless Being, while spiritual imagination of Being is always based on ideas from the past. Direct experiencing is exchanged for indirect experiencing… assuming seems more compelling than living. fearfully surviving looks better than living in and as Love. The latter is always true… survival happens temporary as mind, it begins in the morning and ends in deep sleep. Survival comes and goes… Being Is.

The sense of being that is caught by psychic imagination, is unable to see the delusion of its imprisonment. That is why goals focused on 'empowerment' are so attractive. A development in time has to bring improvement, which is the justification and amplification of avoiding. Being is not yet recognized as the Openness of Now. The notion reigns that 'I' can be better, later… when the goal is reached. Ensoulment comes from Being that Is Now.

In the mind is a psychic construction with which the sense of being is identified. This is build from interpreted snapshots of happenings taken from there context. The 'I' that is suggested by the construction is believed to be damaged and separate.

Psychological contraction is like a dog that has to lick its wound. Approaching it activates defense, because the imaginary me-person is bewildered by fear. This asks for time, patience, and delicate approach. Addressing too fast, or too direct, triggers fear to attack.

Defense is also the mechanism of the identity, fearfully held together. The damaged self-image often is connected to impressive events that are stigmatized by the collective as outrageous, especially when something occurs within a family.

The psychological 'me' needs time to process that which is experienced as betrayal, but has to be kept secret for the inner and outer world… time to see that Being cannot be damaged, that losing the describable identity evokes fear. also the mind seems to have to get used to the realization that someone who afflicts pain often is driven by denied pain. this insight however, is the lagging of the psyche… seeing happens timelessly, before time.

It isn't difficult to see that a damaged self image needs time and often keeps the procedure and circumstances of what happened in denial out of sight. It is also not strange that a need for activity comes from this denial to give the sense being hope for a better future. The tenderness of Being seems lost, because it got 'coated' with a haze of 'not safe'.

Sometimes the hypnoses of 'being damaged' breaks open during a new, fierce event, sometimes through an unexpected insight or a kind word. Sometimes the sense of being unexplainably drops back into the directness of Being. Always the Grace of the unimaginable Miracle is at work, always there is recognition of Truth dissolving the illusion of the separate self.

When denial breaks open there's always sedation possible… The ego-will has as a goal: to keep pain out of the direct experience. It conjures up everything to focus attention to something else, fooling itself for a long time… even with spiritual activities. Until consciousness recognizes the Being that Is and presence burns all confusion. Intention then changes into ensoulment.