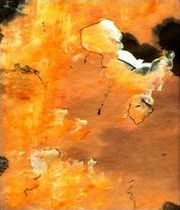 Attention is often caught by allegations. Believe, coming from that, projects itself as a psychological atmosphere in the mind.

Consciousness seems to be located in this (created) landscape… as a separate form. This false identity doesn't know how to be and feels not welcome, without realizing it is an imagination… in resistance to a projected 'surrounding'.

It really feels as if consciousness is a form, which cannot be safe and happy because of a hostile surrounding. Open Directness of Being seems forgotten… natural, silent noticing is overshadowed and over-shouted by a cramped, tense focus of distrust.

Attention learns to look around from this suspicious focus, and forgets the nature of innocent Openness. This focus seems to be in a surrounding, unaware of being a hypnoses that is suggested through identification with what seem to be old experiences, belonging to 'me'.

Direct exploration reveals that the central figure is imaginary, evoked through ascribing thoughts, mental constructs, emotions, feelings and perceptions to an independently operating, separate self.

Realization, that Consciousness isn't an object in a space, but a direct Openness to which perception appears, dissolves the suggestion. Identification with what was taken as the I-form, or central figure, stops in realization… in recognition of Openness.

In stead of a 'me' struggling through time and space, everything passes through Openness. In stead of a tense focus that has to get fulfilment from some future thing, attention rests in the fullness of direct, open Being.

Allowing fear, grieve or pain, makes aware of the wonder of Light and Being… the struggle for better experience stops. In the allowing and experiencing resistance turns into Love. This entails that everything truly is felt through and Openness is a living reality on the physical plane.

Investing in the central figure and its mission drops. Ingenuity stops the compulsive avoiding of direct experience. Not knowing how to be changes in a wondrous, endless deepening of experience. Being is recognized as the one Beloved, and Consciousness as the expression of that.

Profound re-orientation takes place… the old ego-identity breaks open and the 'outlook' from where perception happened changes in an unnameable, formless presence-being. On the level of the body (form) this needs time to integrate and allow the mind to get used to not obeying the habits and allegations of the ego.

That is the realization of Openness, in order to come to expression from that Light in the world of forms. Where ego-identity served self-interest, there is now service to the One.